At least 7 dead in Seoul-area flooding amid record rainfall

SEOUL — At least seven people have died in flooding after intense downpours fell over South Korea on Monday and Tuesday, including the capital of Seoul, inundating city streets and subway stations.

Photos and videos from the Seoul metropolitan area, which is home to about 25 million people, showed half-submerged cars, people walking through waist-deep water and subway stations overflowing. Government officials said that the seven reported deaths included a 13-year-old who got stuck in the basement of a building in Seoul with two adults. Six other people are missing. 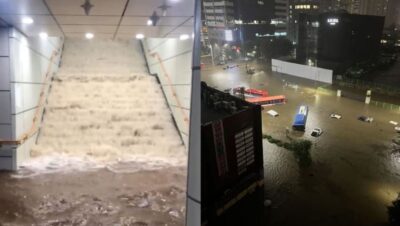 The record rainfall — which had not ended as of Tuesday morning local time — was the worst in some parts of Seoul since 1904, the year local officials began documenting precipitation. About 381.5 millimeters (15 inches) of rain hit southwestern Seoul on Monday, according to the Korean Meteorological Administration. The next-highest rainfall day was Aug. 2, 1920, when about 354.7 millimeters (14 inches) fell in the capital.

One particular image sparked online worry and intrigue: a man in a suit sitting atop a submerged car in Seoul’s upscale Gangnam district.

“Nothing is more precious than life and safety. The government will thoroughly manage the heavy rain situation with the central disaster safety measures headquarters,” President Yoon Suk-yeol wrote in a Facebook post.

Blackouts hit some parts of the city, and residents living in lower areas were told to evacuate.

The Korea Meteorological Administration issued downpour alerts through Monday night across different central regions, warning that some areas would see 50 to 100 millimeters (1.9 to 3.9 inches) of rain per hour. It also sent out heat advisories across eastern South Korean provinces.

Joseph Hatfield, 36, a teacher in Seoul who recorded a video of the flooding in the city of Anyang in Gyeonggi province, south of Seoul, told The Post that he saw many people in first-floor units trying to remove water from their homes and businesses.

“The river floods after heavy rainfall, but I’ve never seen it this high before so it was quite alarming,” he said, adding that the levels rose gradually throughout the afternoon as it rained into the night.

These intense precipitation events around the world are increasing because of human-caused climate change. A warmer atmosphere is able to hold more moisture and produce heavier rainfall.